Beloved is a 1987 novel by the American writer Toni Morrison. Set after the American Civil War (1861–1865), it is inspired by the life of Margaret Garner, an African American who escaped slavery in Kentucky in late January 1856 by crossing the Ohio River to Ohio, a free state. Captured, she killed her child rather than have her taken back into slavery.

Morrison had come across an account of Garner, “A Visit to the Slave Mother who Killed Her Child” in an 1856 newspaper article published in the American Baptist, and reproduced in The Black Book, a miscellaneous compilation of black history and culture that Morrison edited in 1974.
The novel won the Pulitzer Prize for Fiction in 1988 and was a finalist for the 1987 National Book Award. It was adapted as a 1998 movie of the same name, starring Oprah Winfrey. A survey of writers and literary critics compiled by The New York Times ranked it as the best work of American fiction from 1981 to 2006. 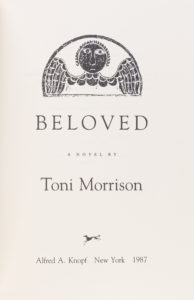 Beloved received the Frederic G. Melcher Book Award, which is named for an editor of Publishers Weekly. In accepting the award on October 12, 1988, Morrison said, “that ‘there is no suitable memorial or plaque or wreath or wall or park or skyscraper lobby'” honoring the memory of the human beings forced into slavery and brought to the United States. ‘There’s no small bench by the road,’ she continued. ‘And because such a place doesn’t exist (that I know of), the book had to.’ Inspired by her remarks, the Toni Morrison Society began to install benches at significant sites in the history of slavery in America. The New York Times reported that the first ‘bench by the road’ was dedicated on July 26, 2008, on Sullivan’s Island, South Carolina, the place of entry for some 40 percent of the enslaved Africans brought to the United States. Morrison said she was extremely moved by the memorial. In 2017 the 21st bench was placed at the Library of Congress. It is dedicated to Daniel Alexander Payne Murray (1852–1925), the first African-American assistant librarian of Congress.

The novel received the seventh annual Robert F. Kennedy Center for Justice and Human Rights Book Award in 1988, given to a novelist who “most faithfully and forcefully reflects Robert Kennedy’s purposes—his concern for the poor and the powerless, his struggle for honest and even-handed justice, his conviction that a decent society must assure all young people a fair chance, and his faith that a free democracy can act to remedy disparities of power and opportunity.”