Colt Snuffer and The Dead Horsemen are a Southern Gothic Blues outfit based out of Muskegon, Michigan. Having released two albums “Killing Crows (2018)” and “Boil and Brand (2019)”, Colt Snuffer began searching to fill his band out and find his Horsemen. In 2019 Colt Snuffer added Larry Passenier (Iron Sharpens Iron/Redline) on Drums and other instruments to gain ground on recording and capturing his vision with another like-minded musician. They have high energy vocals with passion and a beat that you have to stomp those boots to. In 2021 Colt Snuffer and The Dead Horsemen recorded their upcoming Album “The Devil You Know” and it was released on September 11th on all platforms. 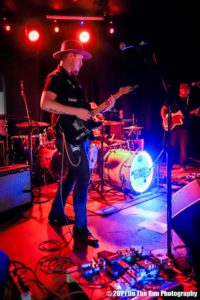 “There’s so much to like about Muskegon’s Colton Snuffer and his band that it’s hard to know where to start. This band’s rootsy, Southern Gothic rock represents the best qualities of musical story-telling, from murder ballads to social commentary, all spilling out with unabashed authenticity and splendid guitar-driven grit.”
– John Sinkevics (Local Spins)

“The overall sound of this album is noticeably dark country, with some gritty-as-hell blues coloring the edges, and plenty of good-ol’ fashion rock n’ roll moving it forward.”
– Justin Stover (devilsmusic.net)