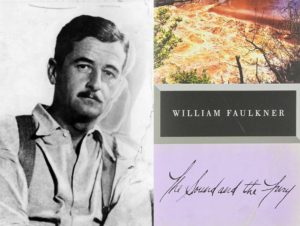 In 1998, the Modern Library ranked The Sound and the Fury sixth on its list of the 100 best English-language novels of the 20th century

The Sound and the Fury is set in Jefferson, Mississippi. The novel centers on the Compson family, former Southern aristocrats who are struggling to deal with the dissolution of their family and its reputation. Over the course of the 30 years or so related in the novel, the family falls into financial ruin, loses its religious faith and the respect of the town of Jefferson, and many of them die tragically.

The novel is separated into four distinct sections. The first, April 7, 1928, is written from the perspective of Benjamin “Benjy” Compson, an intellectually disabled 33-year-old man. The characteristics of his impairment are not clear, but it is implied that he has a learning disability. Benjy’s section is characterized by a highly disjointed narrative style with frequent chronological leaps. The second section, June 2, 1910, focuses on Quentin Compson, Benjy’s older brother, and the events leading up to his suicide. This section is written in the stream of consciousness style and also contains frequent chronological leaps.

In the third section, set a day before the first, on April 6, 1928, Faulkner writes from the point of view of Jason, Quentin’s cynical younger brother. In the fourth and final section, set a day after the first, on April 8, 1928, Faulkner introduces a third person omniscient point of view. The last section primarily focuses on Dilsey, one of the Compsons’ black servants. Jason and Quentin Compson (Caddy’s daughter) are also a focus in the section, but Faulkner presents glimpses of the thoughts and deeds of everyone in the family.

In 1945, Faulkner wrote a “Compson Appendix” to be included with future printings of The Sound and the Fury. It contains a 30-page history of the Compson family from 1699 to 1945.