Carnivàle (HBO) was an American television series that told a Dust Bowl gothic tale, set during the Great Depression of the 1930s. The series, created by Daniel Knauf, ran for two seasons between 2003 and 2005. 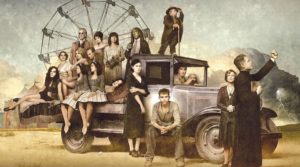 The two seasons of Carnivàle take place in the Depression-era Dust Bowl between 1934 and 1935, and consist of two main plotlines that slowly converge. The first involves a young man with strange healing powers named Ben Hawkins (Nick Stahl), who, after his mother’s death, joins a traveling carnival when it passes near his home in Milfay, Oklahoma. It turns out ot be a mysterious traveling carnival run by an unseen force known only as “Management.” Soon thereafter, Ben begins having surrealistic dreams and visions. Surrounded by magic, Ben reconnects with his long-dormant supernatural powers, which set him on the trail of a man named Henry Scudder, a drifter who crossed paths with the carnival many years before, and who apparently possessed unusual abilities similar to Ben’s own.

The second plotline revolves around a Methodist preacher, Brother Justin Crowe (Clancy Brown), who lives with his sister Iris (Amy Madigan) in California. He shares Ben’s prophetic dreams and slowly discovers the extent of his own unearthly powers, which include bending human beings to his will and making their sins and greatest evils manifest as terrifying visions. Certain that he is doing God’s work, Brother Justin fully devotes himself to his religious duties, not realizing that his ultimate nemesis Ben Hawkins and the carnival are inexorably drawing closer.

In tracing the lives of disparate groups of people in a traveling carnival, Knauf’s story combined a bleak atmosphere with elements of the surreal in portraying struggles between good and evil and between free will and destiny. The show’s mythology drew upon themes and motifs from traditional Christianity and gnosticism together with Masonic lore, particularly that of the Knights Templar order.

The Carnivàle story was originally intended to be a trilogy of “books”, consisting of two seasons each. This plan did not come to fruition, as HBO canceled the show after the first two seasons. Each season consists of twelve episodes.