Tramp Art is a mainly American genre of art using small pieces of wood, primarily from discarded cigar boxes and shipping crates, that are usually  whittled into layers of geometric shapes having the outside edges of each layer notch carved, or in the technique of a Crown of Thorns, which gives it its gothic tramp art look. It was popular in the years between the 1870s to the 1940s when the art form started to decline. 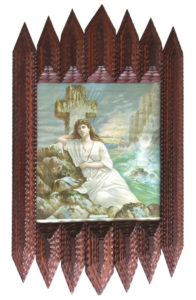 The artists used simple tools such as a pocketknife to carve the wood and assemble mostly utilitarian objects. The most common forms were the box and the frame and although there were no rules or patterns to lend commonality in the artists’ work there were objects made in every conceivable shape and size including full sized furniture and objects of whimsy.

There is a great deal of proof that tramp art was not made by tramps exclusively as the name suggests. There are only a couple of documented makers out of the hundreds of makers we have uncovered in our research who were itinerant. Tramp Art was the art of ‘everyman‘. It appealed to anyone who had the desire to take discarded materials to make art. It was practiced in the home far from the art schools or workshops of high art. The men were unschooled in the arts but not in their hearts as evidenced by the use of hearts in their work. It is indeed a fact that the term ‘Tramp Art’ was given to the art form many years after its popularity waned so the term holds no relevance to the art form. The origin of the word tramp which is from a European derivative is inconsequential and irrelevant. By giving too much relevance to the term tramp art other than it being a catchy name we are diverted from the true origins and are spun in the wrong direction historically and scholastically. 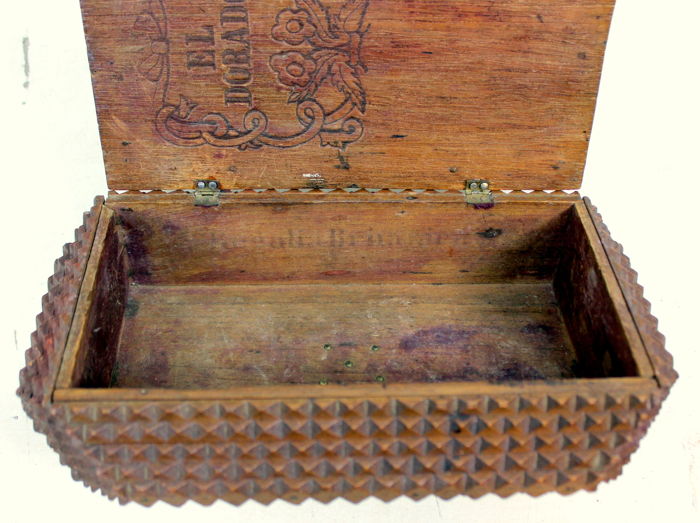 Tramp Art was first discovered in print in 1959 by Francis Lichten in Pennsylvania Folklife, Volume 10 Spring 1959 in which she termed the art ‘Tramp Work.’ In 1975 Helaine Fendelman published the first book on tramp art, Tramp Art an Itinerant’s Folk Art. The book acted as a catalog to the first museum show on the art form sponsored by the American Museum of Folk Art. And with the recognition of gothic art, we can call several of these pieces gothic tramp art.