A prose writer in a variety of genres – Western, horror, science fiction, mystery, and suspense – Joe R Landsdale has also written many comic books and screenplays labeled Horror Western. His short novel Dead in the West is one of the seminal works in the genre, and placing zombies in the Wild West was a match made in both Heaven and Hell. He’s a horror veteran who also nails one of the key components of any good western–an authentic voice. And all with a healthy dose of humor. Saddle up with Deadman’s Road which contains the complete text of Dead in the West along with other stories about the Reverend Jebediah Mercer. Or try Flaming Zeppelins which mixes real-life personalities like Buffalo Bill and Annie Oakley with literary characters like Frankenstein’s Monster and Captain Nemo. 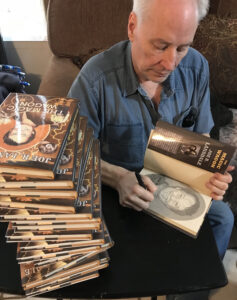 Joe Lansdale has won eleven Bram Stoker Awards over the course of his long career. The short story Night They Missed the Horror Show won the award for “Short Fiction” in 1988. In the “Long Fiction” category (which is for novellas, though it also initially included comic book work as well), he won in 1989 for On the Far Side of the Cadillac Desert with Dead Folks, 1997 for The Big Blow, and 1999 for Mad Dog Summer (a shared award with Brian A. Hopkins’ “Five Days in April”). In 1992 the story The Events Concerning a Nude Fold-Out Found in a Harlequin Romance shared the “Long Fiction” award with Aliens: Tribes by Steve Bissette. In 1993, Jonah Hex: Two Gun Mojo won in the newly created “Other Media” category. Lansdale’s 2006 anthology Retro Pulp Tales tied for the Best Anthology category with Mondo Zombie edited by John Skipp. He won a Bram Stoker Award in the long fiction category for Fishing for Dinosaurs which was published in the collection Limbus 2.

Not content to pioneer the weird western in only fiction, Lansdale later turned his attention to comics, creating some of the finest weird westerns in that medium as well with his run writing Jonah Hex. Simply put, a gunslinger of the highest order.