Sinister Seymour (Larry Vincent [June 14, 1924—March 8, 1975]) was an American television gothic horror host, famed for his character who presented—and heckled—low-budget horror and science fiction movies on Fright Night on KHJ-TV and Seymour’s Monster Rally on KTLA, both local stations in Los Angeles between 1969 and 1974. He was noted for his style of criticizing the movies he presented in an offbeat and funny manner, usually appearing in a small window which would pop up in the corner, tossing a quip, then vanishing again. Sometimes he would, using blue-screen, appear in the middle of the movie, apparently interacting with the characters in the movie. 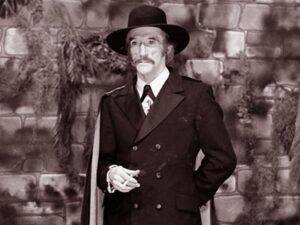 From 1969 to 1974 Vincent was the host for the horror shows Fright Night on KHJ-TV and Seymour’s Monster Rally on KTLA. In addition to his gothic horror host duties, Larry Vincent served as Knott’s Berry Farm‘s inaugural “Ghost Host,” in 1973 at Knott’s Scary Farm Halloween Haunt, which to this day cultivates mass interest on the sacred holiday. 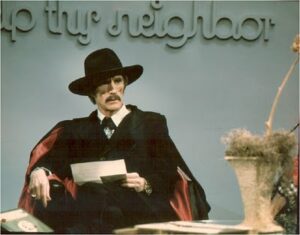