Cowboy Artist Kyle Polzin grew up in South Texas, and began developing his artistic skills at a young age under the guidance of his father. Brought up around horses and the Gulf coast, Kyle grew to appreciate the beauty and heritage of his Texas surroundings which is reflected in his art. He worked closely with his grandfathers who were both skilled carpenters. Through their teachings, learned the value of craftsmanship and the reward of creating with your hands. As a result, his art is characterized by a strong sense of design, precision, and historical accuracy. Polzin says, “Inspiration comes to me through experiences I have, people I meet, movies I see, and songs I hear. For instance, on a recent trip to Mexico, I walked past this old man rolling cigars outside of a shop. I stopped and watched for a few minutes. The smell of the tobacco leaves, the old wooden table, and the tools he used fascinated me. I might have to do a painting of that!”

“I love history,” he continues. “Everything I do, for the most part, has a nostalgia kind of a feel to it. I like the patina that artifacts take on. I like clothes that are a little tattered — the things that can tell a bit of a story, especially with old cowboy subject matter.” 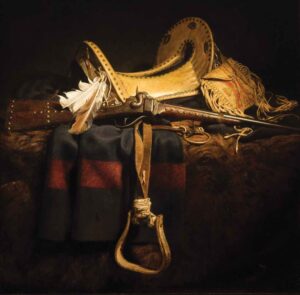 Kyle Polzin received the Express Ranches Great American Cowboy Award at the 2013 Prix de West in Oklahoma City, and the Don B. Huntley SPIRIT OF THE WEST Award. These are given in recognition of the most outstanding work in cowboy subject matter for two years in a row at the Autry National Center’s Masters of the American West Fine Art Exhibition and Sale. He has had numerous sold out shows and his work has been featured in Art of the West, Southwest Art, Western Art Collector, Texas Outdoors Journal, and numerous other publications. He currently resides in Austin, Texas with his wife Leigh along with their two young daughters.

Polzin’s shows routinely sell out and he will continue to be a most important cowboy artist to watch for many years to come.