Finch is an EP by American five-piece indie rock band Murder by Death. Although the band’s fourth album, 2008’s Red of Tooth and Claw, was released on the Vagrant label, the Finch soundtrack release was on Tent Show Records, Murder by Death’s record label in the EastWest family of labels. 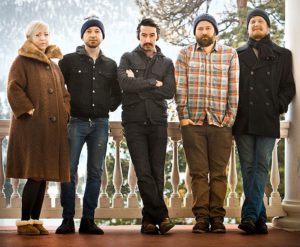 The album is an instrumental soundtrack to the book of the same name by author Jeff Vandermeer. The band’s website includes this description of the album:

This album is an instrumental soundtrack to a book called “Finch” by science fiction/fantasy/horror author Jeff VanderMeer. Jeff approached MbD about doing a soundtrack to go with the limited edition of his new book, and we thought it was such a strange idea we had to do it. The book reminds us of “Blade Runner” – with spore-faced bad guys. Bitchin’. We locked ourselves up in our friends studio (Farm Fresh) in Bloomington, Indiana for 5 days and wrote and recorded an instrumental album inspired by the book. We have used a lot of crazy techniques that we have never tried before on this record. Our old pianist Vincent Edwards lent his hand(s) at the piano, organs, and Rhodes. Each song is attempting to recreate a scene or mood from the book.

Adam Turla:I didn’t know who Jeff Vandermeer was, but one of my best friends who I grew up with is an avid science fiction and fantasy reader, and he knew who Jeff was. I told him about the project and he said, “You should do it.” And our publicist had heard of Jeff. So I said we’d read the manuscript and go from there. And we read it and liked it.

We had never done anything like this before, so we decided to approach it in the sort of way that we would have for a movie. We just took scenes and said, “What would the score be here?” Or maybe not so much what would be playing if this were an actual movie, but how can you evoke the images or scenes through music?