The mournful tone of the 2007 film The Assassination of Jesse James By The Coward Robert Ford is strikingly captured by the amazing Southern Gothic score by Nick Cave and Warren Ellis. The film portrays the end of grim life of the notorious outlaw Jesse James (played by Brad Pitt) and the man who killed him, Robert Ford (Casey Affleck) . It also reveals the strained relationship between Jesse and his brother Frank (Sam Shepard), and the wordless exchange between the two as they coldly part ways is accented by a haunting melody. Another striking moment occurs towards the end of the film when Bob Ford has to listen to the lyrics of “The Ballad of Jesse James”,  as performed by a strolling minstrel played by Cave. This folk song refers to Ford as a coward. From the music box theme that opens the film, to the beautiful, dirge-like “Song For Bob” at its closing, the soundtrack evokes the same dark emotions that the film’s stark cinematography brings to the viewer. Nick Cave and Warren Ellis’ masterful use of traditional instruments with modern structure and production techniques has created their best collaboration to date. It’s too bad the film’s distribution was buried due to differences between the studio and director Andrew Dominik. Again, just a masterful Southern Gothic score. 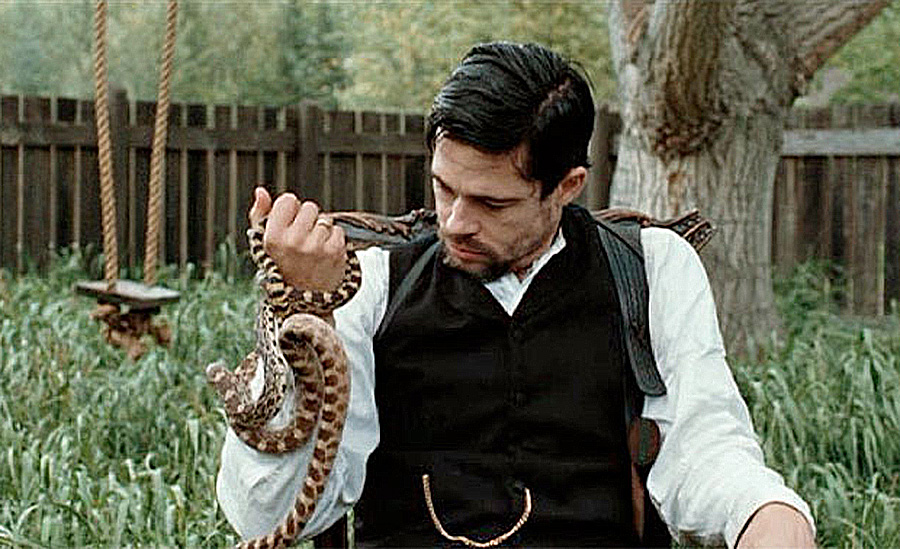 And as Film School Rejects so aptly put it:

“Cave and Ellis’ score for Jesse James is both beautiful and sad, successfully embracing the world director Andrew Dominik created without overpowering it. While certainly dream-like, the score constantly seems to be waiting to be undone, much like the two men at the center of the film. Jesse James gives the appearance of a man who says what he thinks and always lets people know where they stand, but there is a sadness and mystery behind his eyes that is never fully explained. Robert Ford is an oddly anxious man who never quite answers the question Jesse poses to him about whether he wants to be like him, or actually be him. As these two men eventually collide into one another, the truth of who they really are is never fully revealed, but it is wonderfully, hauntingly hinted at throughout the score.”