Brimstone is a 2016 gothic Western movie written and directed by Martin Koolhoven, starring Dakota Fanning, Guy Pearce, Kit Harington, and Carice van Houten. It is an international production, although mostly Dutch.The film is shown in four chapters: Revelation, Exodus, Genesis and Retribution. In Revelation, Dakota Fanning plays Liz, who lives with her husband and two children (one is a 14 yr old boy from her husband’s prior marriage, the other is a young girl) in the old west. In Exodus, A young girl named Joanna (played by Emilia Jones) walks exhausted through the desert and is picked up by a Chinese family. In the mining town of Bismuth, she’s sold in a bar/brothel owned by Frank (Paul Anderson). 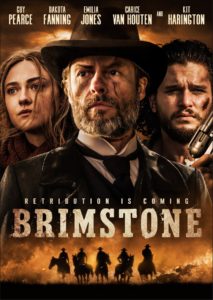 Then in Genesis, the chapter opens in the desert, where a couple of dead bodies are lying around. It is the aftermath of some violent dispute over stolen gold. Two men are alive, Samuel (played by Kit Harington) and Wolf (Jack Roth) are badly wounded. Young Joanna (again played by Emilia Jones) lives with her mother (Anna, played by Carice van Houten) and father, who is revealed to be The Reverend. They are part of a Dutch community who came over from The Netherlands to establish a purer form of Christianity.

Finally, in Retribution, The story returns to Liz (Dakota Fanning). With her children, Sam and Matthew, she is plowing through the snow to go to the home of Eli’s father, up in the mountains. When they cross a frozen lake, Matthew is shot by The Reverend and dies. Liz and Sam reach their destination. As Liz is guarding the house, The Reverend shows up again. He tells her that God has provided him with an alternative again and that he will do exactly to her daughter what he did to Liz.

Brimstone received mixed reviews in the US, in contrast to positive reviews in Europe and at festivals. Empire Magazine gave it 4 stars and called it “white-knuckle tense”, The Hollywood News called it “one of the most visceral and intense western thrillers of all time” and Peter Bradshaw wrote in The Guardian: “This epically long, lurid, violent western from Dutch film-maker Martin Koolhoven has a kind of Tarantino-ish prolixity and narrative ingenuity. Despite its very indulgent length, it never bores.”