Charley Horse began in 1993 as an inventive and experimental cowpunk rock n roll project featuring Sean Wheeler (Throwrag), Chopper Franklin (The Cramps) and Mickey Petralia. The three locked themselves in their sonic laboratory and  took old rockabilly & blues loops, added Hot Rod flick and Film Noir dialog clips & sound effects and topped it all off with gritty, dark lyrical ramblings that became 10 tales of life on the riled side, two of which (Back Down & We All Fall Down) ended up on a long out of print Hellnote Records 7” single. Unfortunately the trio were called away from the project, Sean forming Throwrag, Chopper joining The Cramps and Mickey producing such hit makers as Beck, Rage Against the Machine and Peaches. 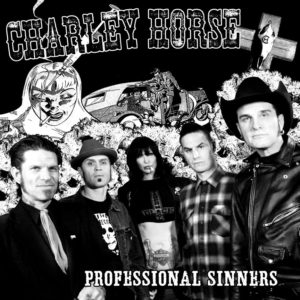 Fast forward 12 years to 2005 and these recordings are released as “Unholy Roller” on Acetate Records, featuring cover art by low brow artist Vince Ray. It was then that Sean & Chopper got together some friends to film the video for “Bad Ass Dad”, and Corey Parks (Nashville Pussy, Die Hunns), Rick Ballard (Dragbeat) and Robert Shawn decided they had such a blast that they wanted to help unleash this fury upon an unsuspecting world. Dino Guerrero (Mike Ness, The Hangmen) soon replaced Robert on drums and after a few American tours and a European jaunt the band entered into two recording studios (one with producer Cameron Webb of Motorhead and Social Distortion note) to slam away at their newly written material. In the end the band emerged with 10 more terrorizing titles ready for release, and booked another European tour. But this time the planets didn’t align for the gang, the songs were shelved, the tour was called off, and the Charley Horse members went off to wreak havoc in their own prospective ways.

In 2011 Sean and Chopper  decided that Charley Horse should bring forth a new record, this time a Limited Edition, Screen Printed, Autographed & Numbered LP on Ratchet Blade Records, you can check it out HERE.