In The Reflecting Skin it’s the 1950’s, and a young boy living with his troublesome family in rural USA fantasizes that a neighboring widow is actually a Southern Gothic vampire, responsible for a number of disappearances in the area. 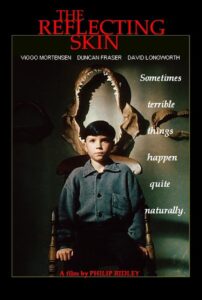 Eight-year-old Seth Dove lives in an isolated American prairie community in the 1950s. The film opens with Seth and his friends, Eben and Kim, playing with a frog Seth has found in the fields. The boys inflate the frog by inserting a reed up its anus and leave it by the side of the road. When a local English widow, Dolphin Blue, stops to inspect it, Seth shoots the inflated frog with a slingshot, causing it to explode over Dolphin.

Seth retreats back to the small gas station where he lives with his overworked, harsh, longing mother Ruth and shy, closeted, detached father Luke. Seth’s older brother, Cameron, is away on military service in the Pacific (Ruth refers to them as “the pretty islands”). Seth serves gas to a mysterious group of young men driving a black Cadillac, who promise to see him again soon and drive off.

Seth is sent to Dolphin’s house to apologize for the frog prank. Dolphin is haunted by the memory of her dead husband, who hanged himself for unknown reasons a week after their wedding. Surrounded by artifacts from her husband’s family’s whaling past, Seth takes some of her self-pitying remarks (she claims to be “two hundred years old”) literally. After having just learned about vampires from his father, Seth begins to believe that Dolphin must be a vampire.