The Southern Gothic thriller Hush… Hush, Sweet Charlotte directed and produced by Robert Aldrich. Forty years ago, on the night they were meant to elope, Charlotte Hollis (Bette Davis) found her lover decapitated during a party, the blood on her dress leading everyone to suspect she was the murderer. Now, in 1964, Charlotte is an old recluse and must fight to keep her home. She enlists the help of her cousin Velma (Olivia de Havilland), who was there at the time of the murder. However, soon after Velma’s arrival, Charlotte’s mind becomes unstable, and she starts seeing her dead lover’s head. 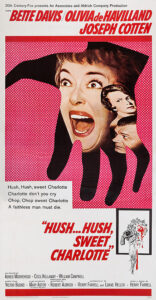 John Mayhew (Bruce Dern), a married man, is having an affair with Charlotte Hollis. When Charlotte’s father, Sam (Victor Buono), a local bigwig (the town is even named after the family) finds out that John was planning on eloping with Charlotte, he demands that John tells Charlotte during a big party that he’s breaking off their relationship. John ends up dead, and Charlotte is the likely suspect. Thirty-seven years later, Charlotte is still living as a recluse on her family’s plantation, but now she is being forced to move, as a highway is going to be built across her property. Gradually, people come back into her life to ostensibly help her.

Davis and de Havilland are both incredible in the Southern Gothic thriller, and both go through a very wide range of emotions. Oddly, Agnes Moorehead (as Velma Cruther) was more recognized for her performance than the rest of the cast in terms of awards and nominations, with de Havilland receiving neither.

“Hush…Hush Sweet Charlotte” is a grand movie, with grand actors and grand moments. The story contains mystery, spine-tingling suspense, and it veritably drips with Southern angst. Though the film is a tad campy in a few spots and is a bit long, nevertheless it’s wonderfully entertaining.