Bastard Out of Carolina, Dorothy Allison’s Southern Gothic debut novel, first published twenty-five years ago, features Ruth Anne (Bone) Boatwright, the novel’s narrator, recounting things she couldn’t possibly remember—about her mother, Annie, becoming pregnant with her at the age of fifteen; about Annie’s serial attempts to get the literal red-ink stamp of illegitimacy removed from infant Bone’s birth certificate; about the lawyers and courthouse clerks who laugh at those attempts. The laughter is meant to make sure that Annie and her child know their place, and stay there. “We knew what the neighbors called us,” Bone says. “We knew who we were.” 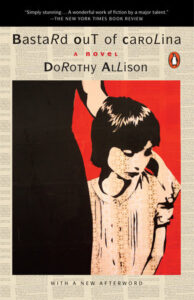 Who the Boatwrights are, according to the powers that be in nineteen-fifties Greenville, South Carolina, where the novel is set—and where Allison was born—is “white trash.” That classist and racist slur is still hurled routinely today, even by those who mean to express their uncompromising opposition to classism and racism. Each time it’s uttered, it tells an ugly story about who counts and who doesn’t. One way of reading Allison’s novel is as a story about the power of such stories—the ones that are told about us, the ones that we learn to tell about ourselves—and the way that they can expand our possibilities, or steamroll them.

Bastard Out of Carolina is a 1992 novel by Dorothy Allison. Semi-autobiographical in nature, the book is set in Allison’s hometown of Greenville, South Carolina in the 1950s. Narrated by Ruth Anne “Bone” Boatwright, the primary conflict occurs between Bone and her mother’s husband, Glen Waddell.

The novel examines the complexities of mother-child relationships, conditions of class, race, and sexuality. All in which play out in Bone’s life and her relationships with others.

The Southern Gothic debut book was adapted into a film in 1996.