A Gothic Western that is often looked at as a heavy apocalyptic film is Paul Thomas Anderson’s There Will be Blood (2007), where Daniel Day-Lewis’ Daniel Plainview builds an oil empire, only to regress, literally and figuratively, to a murdering primate. In Anderson’s view of the West, the Church is not spared from the moral darkness spreading like an oil spill. The evangelical minister Eli (Paul Dano), who ends up being violently murdered by Plainview in the film’s final scene, is no better than Plainview in his egotistical crusade to build his Church of the Third Revelation. Many critics have pointed to the similarities between Welles’ Charles Foster Kane and Daniel Plainview, both self-driven men who build empires only to become paranoid self-imposed hermits who spent their final years isolated from society in their mansions. The bleak, desolate landscape common to the Western is transformed into Plainview’s cavernous mansion, which houses its own bowling rink where he murders Eli. 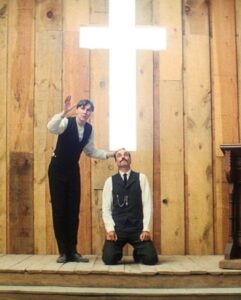 Many have seen the apocalyptic film as a commentary on the nature of capitalism and greed, and its inherent national presence in America. Daniel Plainview’s “I have a competition in me” speech has been looked upon as key when analyzing the film from this angle.

Anderson, who had said that he would like to work with Daniel Day-Lewis, wrote the screenplay with Day-Lewis in mind and approached the actor when the script was nearly complete. Anderson had heard that Day-Lewis liked his earlier film Punch-Drunk Love, which gave him the confidence to hand Day-Lewis a copy of the incomplete script. According to Day-Lewis, being asked to do the film was enough to convince him. In an interview with The New York Observer, he elaborated that what drew him to the project was “the understanding that [Anderson] had already entered into that world, he wasn’t observing it – he’d entered into it – and indeed he’d populated it with characters who he felt had lives of their own”. 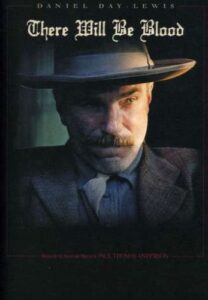 Anderson said that the line in the final scene, “I drink your milkshake!”, was paraphrased from a quote by former Secretary of the Interior and U.S. Senator from New Mexico, Albert Fall, speaking before a Congressional investigation into the 1920s oil-related Teapot Dome scandal. Anderson said he was fascinated “to see that word milkshake among all this official testimony and terminology” to explain the complicated process of oil drainage.

Tags: apocalyptic film there will be blood
Categories: Film & TV