The Last of the Mohicans is a 1992 American epic historical dark Americana film set in 1757 during the French and Indian War. It was co-written and directed by Michael Mann and was based on James Fenimore Cooper’s 1826 novel The Last of the Mohicans: A Narrative of 1757 and George B. Seitz’s 1936 film adaptation, owing more to the film than the novel. The film stars Daniel Day-Lewis and Madeleine Stowe, with Jodhi May, Russell Means, Wes Studi, Eric Schweig, and Steven Waddington in supporting roles. 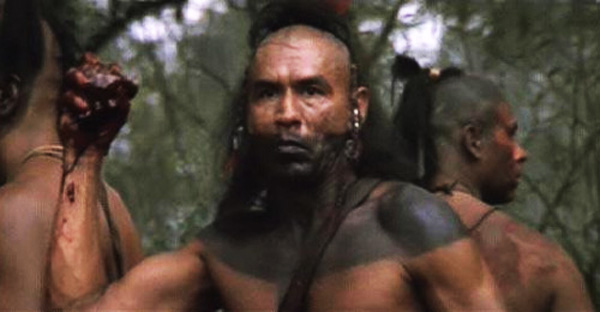 In 1757, the British and French are battling for control of North America in the French and Indian War. Though the colonists are bound by law to join the militia to aid the British, many of them are reluctant to leave their homes and families defenseless.

The last members of a dying Native American tribe, the Mohicans — Uncas (Eric Schweig), his father Chingachgook (Russell Means), and his adopted half-white brother Hawkeye (Daniel Day-Lewis) – do live in peace alongside the British colonists. But when the daughters (Madeleine Stowe, Jodhi May) of a British colonel are kidnapped by a traitorous scout, Hawkeye and Uncas must rescue them in the crossfire of a gruesome military conflict of which they wanted no part: the French and Indian War.

Although the story takes place in upstate colonial New York, filming was done mostly in the Blue Ridge Mountains of North Carolina. The set of Fort William Henry was constructed on felled forestry land adjacent to Lake James in NC. Highway 126, which ran between the set and the lake, had to be closed for the duration of the filming.

The Last of the Mohicans opened with critics praising the film for its cinematography and music. Critic Roger Ebert of the Chicago Sun-Times gave the film three stars and called it “quite an improvement on Cooper’s all but unreadable book, and a worthy successor to the Randolph Scott version,” going on to say that “The Last of the Mohicans is not as authentic and uncompromised as it claims to be — more of a matinee fantasy than it wants to admit — but it is probably more entertaining as a result.”