In the dark Americana film Nightmare Alley a charismatic but down-on-his-luck Stanton Carlisle endears himself to clairvoyant Zeena and her has-been mentalist husband Pete at a traveling carnival, then crafts a golden ticket to success, using this newly acquired knowledge to grift the wealthy elite of 1940s New York society. With the virtuous Molly loyally by his side, Stanton plots to con a dangerous tycoon with the aid of a mysterious psychiatrist who might be his most formidable opponent yet. 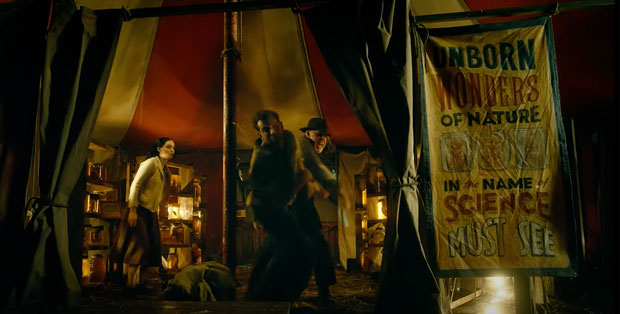 Bradley Cooper stars as Stan, a mysterious drifter who attaches himself to a group of carnies, learning their ways while also learning who he is and what he might be capable of. His knack for charismatic theatricality makes him a nifty faux-psychic, a skill that takes him from the carnival to the city with the help of his new girlfriend, co-conspirator and on-stage assistant Molly (Rooney Mara). But when he encounters an inquisitive and well-connected psychologist, Lilith (Cate Blanchett), he starts to plot out an even bigger con. 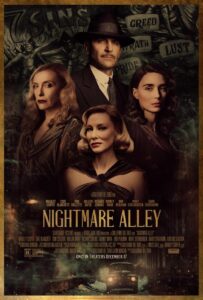 Cooper delves back into the slippery amorality that originally made him famous in films such as Wedding Crashers and My Little Eye with one of his most interesting performances of late, but at 46, he feels too old for the role of someone still figuring out who he really is and what he should be doing with his life (Tyrone Power was 33 in the original adaptation). His relationship with Mara is rushed and barely etched and, instead, he conjures up more of a spark with an underused Toni Collette, who’s having fun as a fake medium. Blanchett is good at vamping it up as a femme fatale, and her pastiche-adjacent period schtick works well here even if her character is sorely lacking. There are also strong, small turns for Richard Jenkins, David Strathairn and Willem Dafoe, giving more than this dark Americana film often deserves.