The Mystery of the Hooded Horsemen is the best of singing cowboy Tex Ritter’s B Westerns. The bizarre story is based on a real case of hooded men who caused trouble in Michigan during the 1930s and were known as the Black Legion. Director Ray Taylor keeps the Ed Kelso scripted story moving at a fast clip and films it as if it were a serial–offering the twist of black masked villains (looking like the KKK, except for the color of their hoods) instead of the hero wearing one. The credits list the singing accompaniment to Ritter being Ray Whitley and his Range Ramblers. One of Ritter’s better numbers is Ride, Ride, Ride. 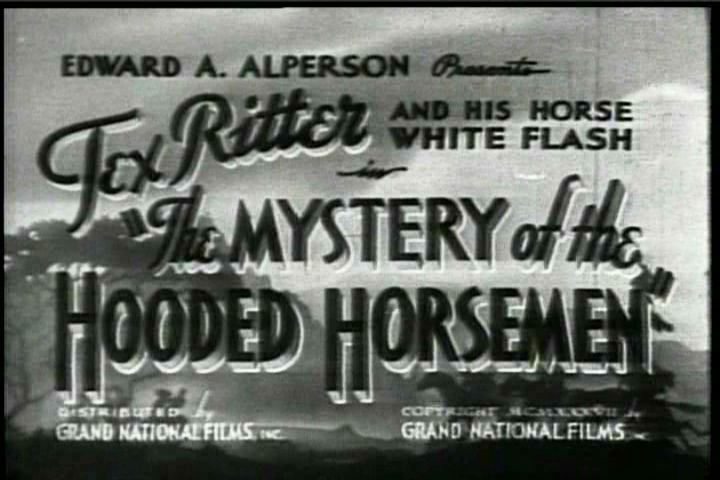 Tex Martin (Tex Ritter) and his partner Stubby (Horace Murphy) are riding the trail at a leisurely pace with Tex singing and Stubby gushing, when they come upon a critically gunshot wounded Tom Wilson (Lafe McKee). Even though they are strangers in these parts and offer no reason for being here, it coincidentally turns out Tom was Tex’s mentor in roping steers and is very fond of the old-timer. Before he dies, Tom says masked men shot him for his mine deed and requests Tex check things out with his foreman Dan Farley (Joseph W. Girard) at the 4 Star Mine. 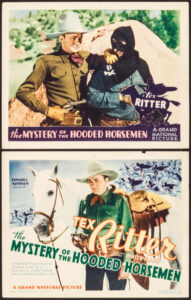 Tex and Stubby head to town first to get directions to the mine but have no intentions of reporting the murder to the sheriff, which I find to be a curious decision. The local saloon is run by the villainous Norton (Forrest Taylor), who we see greeting the returning hooded men as they give him the mine deed. Sitting with Norton is the leader of the hooded men, Blackie Devlin (Charles King), as Norton tells him he answers to the big boss when asked what he intends to do with the deed. When Blackie overhears Tex inquire about the mine with the bartender, he provokes him into a fistfight when he refuses to heed the warning to stay away. The sheriff comes into the saloon after Tex gives Blackie a whooping, and warns the stranger not to go out to the mine because there has been a number of shooting incidents there lately. Tex disobeys that order and meets Nancy Wilson (Iris Meredith), whose uncle is Tom. Foreman Farley shows Tex around the mine and tells him the ore found is valueless. Tom, Dan and Nancy must be either not too swift or plain lying because Tex knows immediately that it is valuable. In any case, Tex keeps his pledge to Tom to save the mine for the new owner Nancy and forms a vigilante group with the other ranchers and miners being harassed by the hooded horsemen. The gang now feels threatened and tries to kill their nemesis Tex at the mine, but he instead kills one of them and uses his hood to infiltrate the gang. The surprise comes when Tex uncovers who is the big boss.