The Skeleton Key is a 2005 American supernatural horror film directed by Iain Softley, written by Ehren Kruger, and starring Kate Hudson, Gena Rowlands, John Hurt, Peter Sarsgaard, and Joy Bryant. The Southern Gothic narrative follows a New Orleans hospice nurse who begins a job at a Terrebonne Parish plantation home, and becomes entangled in a supernatural mystery involving the house, its former inhabitants, and Hoodoo rituals and spells that took place there. The Skeleton Key was filmed at the Felicity Plantation, located on the Mississippi River in Saint James Parish, Louisiana. 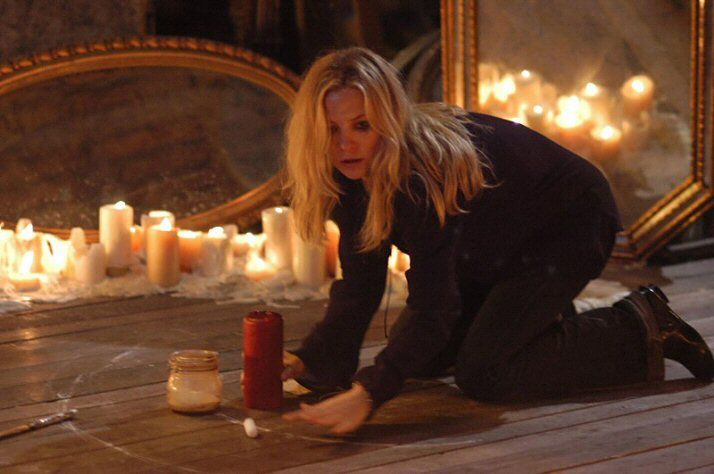 The story revolves around the practice of hoodoo (not voodoo). As one character explains, “Voodoo is a religion. Hoodoo is folk magic. God doesn’t have much to do with it.” She adds, “It’s pretty harmless. It can’t hurt you if you don’t believe in it.” Ah, but there’s the rub. Caroline learns the hard way that it doesn’t take too much to get one to “believe.”

A lot of occult imagery is featured as Caroline tries to get to the bottom of the mystery. She finds a book containing strange drawings and incantations. A recording of a hoodoo ritual contains the lines, “Take me out of darkness, please, Lord. From the devil’s house, take me.” A line of brick dust across a door’s threshold is said to keep out evildoers. A character from the past is referred to as a “conjure man,” and, during a flashback sequence, he and others are shown in a trance as they perform a hoodoo ritual. Caroline investigates potions and other hoodoo paraphernalia, and she performs hoodoo rituals. When she does a healing ceremony for Ben, she doesn’t believe it’s true but thinks Ben does. So, according to the mythology, “It doesn’t matter if it’s not real. It’s real to him.”

Violet has removed all the mirrors from her house because, she claims, you can see ghosts in mirrors. “Maybe all houses have spirits,” she explains. “We don’t see them until we believe we can.” She’s pretty open-minded about having ghosts around, though: “Say what you will about spirits, but I’ve always thought we could learn from them.” Violet asks Caroline, “You religious at all?” to which Caroline responds, “I try to keep an open mind.” Luke later says, “My family is superstitious, too. We’re called Baptists.”