Performing solo, the new headline is David Eugene Edwards playing 16 Horsepower songs, as well as Wovenhand music, with a set spanning his entire discography at the Roadburn Festival on April 22, 2023. DEE rarely, if ever, plays the great songs from his legendary past band 16 Horsepower. Tickets go on sale today. 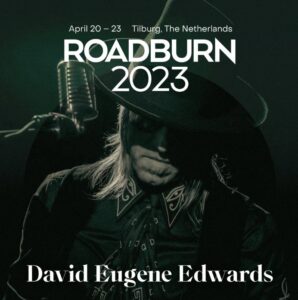 Roadburn has announced the first names for the 2023 line up ahead of tickets going on sale later this month. The festival will take place at the 013 venue, Tilburg, The Netherlands between April 20-23, 2023. Tickets will go on sale at 7pm CET (6pm GMT, 1pm EST, 10am PST) today (November 15).
Roadburn Artistic Director, Walter Hoeijmakers comments:

“We are very thrilled to see Roadburn 2023 coming together, especially in a world turned upside down and all the challenges facing the live music industry. Roadburn 2023 is shaping up to be a very exciting edition of the festival even while navigating the underground post-pandemic. This year’s Roadburn won’t see a curator as there are so many obstacles and pitfalls to overcome; it would be hard for a curator to fully realise their artistic and musical dreams. We at Roadburn will make sure the 2023 edition will be as adventurous and explorational as always, and it will be an anchor point as usual. It will be a very current edition, reflecting the world as it is now.” It will be great to see David Eugene Edwards playing 16 Horsepower songs.

In Wovenhand release news, the Riverwood Arts Cooperative has recorded and filmed a full live session with David Eugene Edwards that will be made available soon by subscription only (all proceeds will go to the artist). If you would like to be alerted when it will go live and to receive all news and updates from DEE / Wovenhand please sign up for their email list HERE.